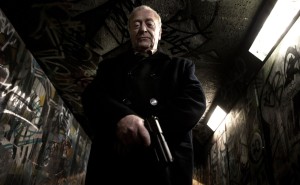 A desolate, bleak urban waste ground populated only by drug addled hooded thugs with guns and knives, hope does not live here, not even close.

But close the curtains and it’s all gone, keep the nastiness at bay, keep the darkness out.

Harry Brown (Michael Caine) has been metaphorically drawing the curtains for years, turning his back on his long past life as a Marine serving in Northern Ireland.

Harry just wants to be left alone to grieve for his departed family. “Content” to play chess with his friend Len on their god forsaken housing estate and sipping half pints at the local with landlord Rourke (Cunningham).

Circumstances dictate that Harry, 75 and in failing health, is drawn back into a violent world, marking him as not your typical vigilante in a cape.

This film goes to dark places, into the unlit subway underpasses we dare not go. There is no holding back on strong language, violence, drug abuse and treatment of women.

Caine again proves the consummate actor he has become, delivering lines in a way no-one else can. Stilted, syntax round the wrong way, you can try and imitate and many do but the original is still the best.

Dubbed unfairly the British “Gran Torino“, or “Death Wish OAP” the film is deeper, more desperate, more urgent than any of these titles might suggest. One has a sense of a film crying out but with no-one listening.

The murders that occur on the desolate estate are investigated by D.I. Frampton (Emily Mortimer) and her partner D.S. Hicock (Creed-Miles). Frampton spends most of the time looking surprised and mortified at what her temporary assignment from Fraud has landed her with. Both Mortimer and Creed Miles come across as believable city cops, cynical, accepting and at the point where “doing their job” is becoming enough.

Harry of course is not a suspect, he can barely shuffle around and drink half pints, it’s unlikely he is knifing and shooting his way through the local thugs, could he?

A stand out scene reminiscent of “Trainspotting”, with two wasted drug dealers, an excellent Stretch (Harris) and Kenny (Gilgun), sets Harry on a path he had not contemplated, quiet rage boiling over into action far removed from his earlier chess games.

Perhaps this is a weak spot, whether his aim and skills would remain this true is debatable but this is not the point of the film. This is no “who done it” either, this is never in doubt. The emphasis is more “why does it not happen more”, a far harder question for society to answer.

There are some interesting plot turns and we will ignore the cardboard stereotype the Police Superintendent represents (Iain Glen), all spreadsheets and flow charts and with no apparent street smarts, sapping the film’s credibility at key points.

The ending is suitably ambiguous but tends to a view point that perhaps undercuts the message you might have expected. This can be discussed at length in your safe, well lit neighbourhood when you get home.

A small, devastating film that at times is difficult to watch. Well acted and in many ways a more realistic and true picture than that portrayed by Clint Eastwood’s “Gran Torino“.

Violent, abusive, bleak and necessary in equal measure – Caine notches another excellent performance under his belt.