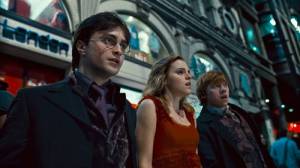 Harry Potter has come a long way, from sunny Hogwarts, Butter Beer and Quidditch. Moving steadily and stealthily throughout the intervening years, from the light to darkness.

This seventh outing has been split into two parts, with the concluding part 2 released in July 2011. This is either because the story is too big to be compressed into one film, or perhaps more money can be made from two separate films, depending on your level of cynicism.

There is precious little sunshine in this episode, moving the franchise into ever murkier and complex themes, stretching the limits of scares, mild horror and peril, that the child friendly certificate will allow.

Following an excellent opening, we are left with Harry or multiple versions of Harry, attempting to flee from the enemies ranged against him. The importance of possessing “True Blood” is now consuming the wizarding world with random “interviews” and detainment at the whim of the persecutors.

There is a strong inference of an almost Third Reich like pursuit of anyone not conforming to the ideal and this truly takes the story into a disturbing underlying direction, if one chooses to look.

The action is centered on Harry, Hermione and Ron as they flee to desolate windswept moors, dense woods and rolling seascapes, searching for the elusive Horcruxes to destroy. Well loved and new characters appear briefly and just as effectively as before but it is the young wizards show in this episode. It seems strange to see the characters interacting with the real world in a mundane way, strolling down Shaftesbury avenue, ordering cappuccinos in a bedraggled cafe, something we have not seen before.

An ever more dangerous and ruthless Voldemort (Fiennes), continues to pursue Harry who is again aided by his friends Hermione and Ron, all actors returning to roles they have effectively grown up with in real life. The acting abilities of Ratcliffe, Watson & Grint has always been the franchises weakest link, especially when playing against a roll call of top flight English character actors. Grint has always fared best, largely playing a representation of himself, Watson has improved, leaving Ratcliffe trying hard but always appearing to act rather than just being, which is what screen acting is all about.

The production values are off the scale, Warner Brothers knows this film will make money and together with Director David Yates, have really pushed the boat out. The film is long but well paced and breaks up the action with differing film styles, shaky cam, flashbacks and a beautifully animated sequence where the Deathly Hallows tale is recounted.

The story is well known by all those who have read the books and again the film stays largely true to the source material. A standout scene being a visit to Harry’s childhood home, which in the book lends itself to a cinematic outing and here it does not disappoint.

To enable infiltration into the Magical ministry the three characters swap with older employees and we are then treated to three different actors playing the parts of Ron, Harry and Hermione. This allows a sliver of humour which is a welcome relief as the plight of our heroes grows ever more dire. Bill Nighy, always a welcome addition to any cast list, also joins the ensemble as the Minister of Magic.

It is interesting to see the action straining the envelope of what is acceptable to a young audience that have grown up with the films. There are occasions where a slightly extended shot would have added more dramatic impact, rather than a cutaway to blood artfully splashed against the wall. This is not to say we want full on gore but noticeably the transformation at Godric’s Hollow would have been more effective with just a few seconds more.

The extended death scene of a character is perhaps a slight misstep, loaded with emotion for a character that some, may not regret passing on. To be fair, JK Rowling does not give the film makers much to work in this regard, as readers of the books will know. A slightly awkward dance scene, does end up as somewhat touching but does flirt perilously close to giggle territory.

Overall this is fun, exciting and scary in parts for younger children. Emotion was perhaps never the franchises strong point and this episode is no exception. However the tone, story and quality throughout the series has always been consistent and if this is anything to go by, we are in for a treat as the series completes.

This is very much a setup film for the final denouement and for those who do not know how this works, expect an abrupt end to this episode, ensuring your return in 2011.

Interestingly the film was to be released in 3D but the conversion process was halted as the target release date could not be met. Part 2 should be ready to be shown in the extra dimension if you prefer.

A very effective thriller or almost “horror lite” in places, a film that can stand on it’s own, with or without what has come before.

Let us hope, that similar to the Lord of the Rings, on which some of these themes are loosely based, we will enjoy an equally strong finish for part 2.