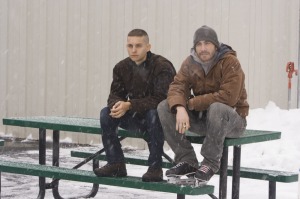 The echoes of wartime combat can often be felt well away from the actual battlefield and with a war as messy and uncertain as Afghanistan, the ripple effect can extend far and wide.

Toby Maguire plays Captain Sam Cahill, the perfect marine with two young children and a “Yummy Mummy” wife, in the shapely form of Natalie Portman. Life is good, despite his brother’s antipathy towards the wars aims and the conflict this causes with the brothers overbearing military father (Sam Shephard).

The status quo is shattered when Sam returns for a second tour of duty in Afghanistan and goes missing, presumed dead.

Director Jim Sheridan handles these opening scenes well and the “notification of death” is shown delicately but with real feeling. A scene played out for real for many families in the US and beyond.

Tom’s bank robbing loser brother Hank (Jake Gyllenhaal), steps up and helps the family come to terms with their grief, providing the support they so clearly need. There are boundaries of course but they are difficult to see as the children start to build a relationship with Hank. Slowly he visibly and believably, grows into the man he always could have been, with the guilt this entails.

The audience then gets to see what really happened in the desert, before Sam returns a different person, almost as alien to his family unit. How can any persons psyche cope with the juxtaposition from one world to another. Through the ages many have coped, many have not. This perhaps is a man who has not quite yet decided into which category he may eventually fall.

There is an excellent scene at the dinner table, where the atmosphere crackles like an electric current, Hank’s oblivious dinner date stumbling innocently into the family train wreck. Tom’s daughter’s are both strongly played with no usual Hollywood moppet pretensions. Bailee Madison is particularly affecting in this scene.

Carey Mulligan is effective as the wife of the Marine incarcerated with Sam. What should one choose to believe in such a situation. Is it better to really know what happened or just accept what you are being told.

This is yet another Iraq/Afghanistan war film that is about everything other than the war. Intricately detailing the human cost of the campaign, both on the soldiers who fight and just as importantly, those that get left behind.

As such and with no Blackhawk helicopters firing missiles at “Insurgent disposable ciphers”, this will have limited appeal to the masses. Which is a shame, as this is a thoughtful well acted and believably scripted piece, that deserves to be seen.

All three principal actors are excellent and there is a real sense of not only could this happen but probably has in some form or another. Whether the stories end the same way, will be determined by just how flexible and resilient the family unit can be.

An adult film, that does not preach and certainly stays well away from any politics, allowing the practicalities and realities to carry the message. War is hard, destructive and keeps on destroying lives long after the last gunshot is fired.

A poignant, heartfelt non war story, without any showboating or grandstanding. Just the facts, presented so the audience can decide what the message might be. Perhaps there is no message, which is the point the director is attempting to make.