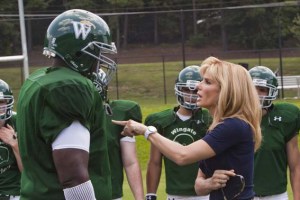 To outsiders, American Football is hard to fathom. Fortunately despite this being a story about “Gridiron” the amount of knowledge required is limited.

“Blind Side Lock” is a position that protects the Quarterback from being tackled, the requisite physique is big, very big and very strong.

African American Michael Oher or Big Mike (Quintin Aaron) has both these attributes. What he has in strength and imposing physicality, he lacks in education and more importantly, a bed to sleep in at night.

Leigh Anne Tuohy (Bullock) and her husband (McGraw) on the contrary, have plenty of spare beds in a mansion that makes the average McMansion look like a garden shed. “Discovering” Big Mike as he has been granted a scholarship to their own children’s posh school, they effectively, albeit initially very tentatively, adopt Michael and include him in the family.

Big Mike could be good at Gridiron as he has the chops for it but lacks any incentive to hurt people. Bullock effectively provides the motivation in a neat touch and also sets up a great line with the bemused football coach (McKinnon).

The Tuohy’s are a god fearing republican southern family who own ninety five fast food restaurants and enjoy all the benefits this entails. Whilst there is a whiff of condescension in the film, you cannot argue with anyone providing the opportunities afforded to the young lad, with no father and a crack head for a mother. There is no question Oher’s life would have moved in a different direction without the family’s charity.

Of course it is not all one way, the benefits the family enjoy from a stranger in their house and the joy and enrichment that it ultimately brings them, is heart warming to see.

Is it a good film that maybe plays a little fast and loose with the facts, yes and yes in that order. Oher in real life, was reportedly perhaps not as slow as portrayed and apparently played football before meeting the family, ultimately none of this matters, this is a film not a biopic.

Bullock is on fine form as the no nonsense mother taking crap from no-one, including some rather threatening homeboys. Is it Oscar stealing stuff (Best Actress 2009), again like “Crazy Heart” and Jeff Bridges, that is open for debate.

Aaron as the almost initially comatose youngster (similar to “Precious”) is effective at looking defenseless and doe eyed and Tuhoy’s husband is amusing as the big businessman deferring to his wife in all the important matters.

The kids are fun and not the usual movie tykes, Jae Head is clearly having fun as the younger son and the daughter Lily Collins looks suitably appalled at the initial idea but thaws believably.

We are of course paraded by what I suspect are real life Gridiron coaches, which means nothing to uninitiated but I sure will be great Coach celeb spotting fun to true fans. Reality is also not left completely at the door, Tuohy asks her husband to get the insurer on the line, as she sweeps downstairs to check on the situation following Mike’s first night at home.

There are faults, there would only be a “movie of the week” without Bullocks performance and occasionally the film feels quite low key but overall a solid translation of a great story.

Incidentally, Kathy Bates has a great cameo and line, which leads to the amusing quote

“Who would’ve thought we’d have a black son before we met a Democrat?”

Better than you might think and enjoyable for all the family with no Gridiron experience necessary.

A real life based film that makes you feel that maybe, just maybe, the world is not such a bad place.

How many movies can you say that about in 2010?