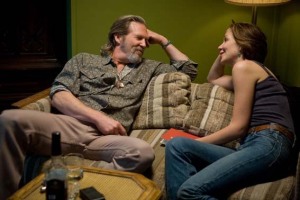 Jeff Bridges is a fine actor and there is no question he is due an Oscar after four nominations, finally achieving Best Male actor in 2009 with this role, as Bad Blake.

Blake is as bad as his title suggests. A has been, washed up, alcoholic Country and Western singer, playing dives and bowling alleys to make ends meet. Ends are not meeting too well, when we first meet “Bad”, who’s shelf life has well and truly expired, despite some loyal fans.

Crashing his way through performances barely coherent, he then shags any available groupie, bad mouths his agent (Keane) and basically is a royal pain in the ass. It is difficult in some ways to watch, as he is an completely unlikable, albeit believable character.

“Bad” is angry at everyone, married several times with a son he does not know and nothing to show for his early promise and partnership with “Tommy Sweet” (Colin Farrell). Angry at everyone that is, apart from the real problem, himself. Looming like an ominous cloud over everything he does.

Farrell despite his fairly brief, almost extended cameo part, comes across as someone who could be in that line of business. He is everything “Bad” is not, sober, businesslike with a fleet of trucks and a sturdy record deal.

“Bad” badly needs to get turned around, lets certainly hope so, as this is going to be a long movie and a serious downer, if he doesn’t.

Cue Maggie Gyllenhall as “Jean Craddock” and her movie cute son “Buddy”. Despite the relationship becoming something an audience can eventually invest in, the intial courtship and age difference is somewhat hard to swallow. Gyllenhall is fine as ever but initially viewers may just take one look and put the supposed attraction in the “wtf” category.

Bridges is good, whether playing the guitar, singing, puking in his own toilet whilst dressed in dirty underpants or oozing regret from every pore. Is it Oscar winning stuff, that is debatable. He is certainly recognizably Jeff Bridges and appears to be playing an extension or extremes of himself but no matter, he is effective and there is certainly no movie without him.

Robert Duval pops in to shore up the later scenes and the ending certainly has a ring of truth.

Overall this seems to be a small scale film, suddenly caught in the headlights of Oscar fame with only a star turn and a rather by the numbers story. Not bad but perhaps nothing to get the heart racing, tears flowing nor any surprises not seen a coming.

Trivia note, both Bridges and Farrell did their own singing and neither lets the side down.

Farrell appears in front of 12,000 Toby Keith fans in the concert scene. The fans reaction is real his appearance was unannounced, the crew filming in the ten minute concert break they had been allocated.

A character driven piece with a fine central turn from Bridges.

Certainly worth a watch, although perhaps a movie where the performance transcends the rather hackneyed run of the mill story.

Recommended, unless you would rather visit the dentist than listen to some good ole’ C & W