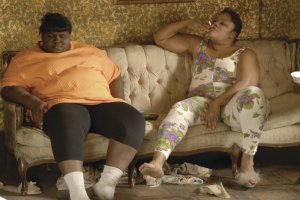 A very realistic portrayal of a life and environment that hopefully for many viewers, will be a complete and devasting shock.

Starting with scenes that are difficult to watch, with examples of physical, sexual and extended mental abuse of Claireece “Precious” Jones, an overweight illiterate sixteen year old girl, living in 1987 Harlem NY.

This is life lived at it’s lowest ebb, subsistence based around accepted misery, masquerading as an existence. One hopes that people really do not live in such circumstances but deep down we know that many do, without the slimmest glimmer of hope and redemption that this movie does offer.

Anyone assuming that “Precious” moves from crushing poverty and illiteracy to become a world class pianist at Carnegie hall, have most definitely picked up the wrong movie, this is not that film.

Directed by Lee Daniels from an adaption by Geoffrey Fletcher (Oscar winner 2010) of the original novel “Push” by Sapphire. The role of “Precious” is played startlingly well by newcomer Gabourey Sidibe (Oscar Nominated). Acceptance of her fate etched in her large face which gradually transforms, slowly and believably, into a determined resolve that she should expect better from those around her. Difficult to believe that this is acting but interviews confirm that Sidibe is nothing like her screen counterpart.

The cold, dark heart of the movie belongs to Mary, the mother of Precious. Played in devastating and Oscar winning form by Monique. This is a woman so badly damaged by circumstances around her, that her only outlet is to lash out at the only thing under her direct control, the unfortunate Precious.

Precious, pregnant twice by her own father, is eventually is given access to an alternative school where the tough but caring teacher Ms Rain (Paula Patton), takes an interest in her education. Is Patton too beautiful for the role, debatable but certainly you will appreciate any brightness in this harsh & necessarily barren film.

Joining an eclectic mix of fellow students Precious slowly enters and discovers the real world. This balances with her necessary flights of fancy, acting as a glamorous film or singing star, which are shown as brief colourful cutaways within the film.

Both Lenny Kravitz (Nurse John) and Mariah Carey are all but unrecognisable from their normal public persona’s and perform well, Carey especially so in a difficult role as the social worker assigned to the case.

The closing scenes contain some of the most raw and exceptional acting you will see, not an easy watch but entirely in keeping with the tone and context of the story. An explanation of sorts but as a justification for the characters actions, hard to accept.

Put simply, in this situation everyone is a victim.

A brutally honest depiction of a lifestyle and circumstance most viewers will hopefully never experience.

An unflinching but ultimately uplifting story deserving of a larger audience but those expecting fairy tale endings should look elsewhere.