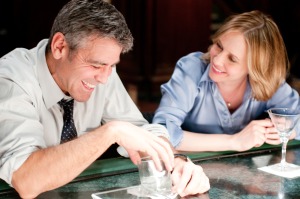 Right from the opening credits montage, you know this going to be one classy movie.

George Clooney as Ryan Bingham is born to play roles like this and director Jason Reitman (trivia note – son of Ivan Reitman of Ghostbuster’s fame) continues on his roll following, “Thank you for Smoking” and “Juno”.

Clooney criss-crosses the American Heartland on American Airlines, staying in hotels and hiring Chrysler Sebring’s as he “fires” office staff on behalf of management too weak to do it themselves.

In doing so he racks up air miles, a lot of air miles.

Spending almost his entire life on the road this clearly is his life, in fact there is nothing else in it. To illustrate this point further, he has occasional speaking engagements where he advocates having a back pack full of nothing, all emotional and physical baggage carefully and deliberately removed, to make those straps lighter on your shoulders.

Bingham is the consummate professional, if you are going to get fired let it be him, nobody does it better. As he says, all the answers to your questions are in the pack helpfully provided at the meetings end.

Meeting his match in a hotel bar, Alex Goran (the beautifully voiced Vera Farmiga), a partner almost his own clone but in female form. Bingham discovers the perfect woman for him, beautiful, unattached, available, provided their schedules synchronize and with no intention of weighing that “backpack” down in any way. The initial meeting is perhaps the finest scene in a movie filled with great scenes, the newly met couple, engage in foreplay with nothing other than Airline and Hotel loyalty cards.

“A Concierge Key, I didn’t even realize they existed”, is the mesmerized response to Clooney’s display of privilege passes.

Back at head office run by a very serious Craig Gergory (Jason Bateman), new girl on the block, Anna Kendrick (Natalie Kenner), suggests a change in procedure to cut costs, advocating “firing by video link”. Obviously, Bingham’s very existence is in doubt but instead, at Gregory’s insistence, Clooney hits the road to show her the ropes. This unwittingly takes them on a journey of discovery both professionally and personally that neither of them anticipated.

This is a very adult, intelligent picture, sad, funny and extremely timely. The use of real sacked staff reacting to Clooney’s standard patter is occasionally heartbreaking to watch. This is mixed with real actors (J K Simmons) where deviation and acting is required – it works very well.

There will be no plot spoilers here, your belief in where the journey will end may depend on your inbuilt cynicism or optimism but no-one should feel shortchanged.

Clooney and Farmiga are a delight to watch together and Kenner does well in a difficult role, her character perhaps has the furthest to move over the film as a whole.

There is much to enjoy here, the sterile bars and hotels, coming home to a empty house and the banality of modern air travel. Clooney manages to make it all work and of course, at all times looks like he has walked out of GQ magazine.

Good to see that instead of relying on matinee looks, Clooney again chooses a movie that matters, which continues his recent path of alternating between more mainstream fare.

A movie that in every way captures the zeitgeist of “right now” it definitely means something, what it says to you will depend on your mood, how old you are and what your life experience is.

There are no easy answers or outcomes here, which is what the best movies are all about.