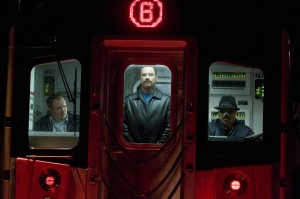 The remaking or re-imagining or “classics” from the past continues unabated, despite mixed results and box office returns.

Denzel Washington has either piled on the pounds for his art or wears a fat suit for this role, as he is called upon to exemplify the normal wage slave drone, beaten down by his particularly petty and small minded boss. Washington is a ex “motorman” (subway train driver) in NY, who has risen to the control room and is steadily working his way backwards, following an accusation of bribery.

Washington is confronted with the kidnapping of a subway train by Travolta who then proceeds to request a $10 million ransom, otherwise passengers are shot on the hour and so forth.

To update the back story, there are some Wall Street references and maybe $10 million is not all the former wall street trader/kidnapper is hoping to make.

Washington is always good to watch, although Travolta appears to be occasionally acting in a different movie, a psycho and out of control one minute and introspective the next. It is difficult to understand whether he acting a part within a part or the actual character he is supposed to be representing.

Gandolfini posts another worthwhile performance as the philandering and on the way out NY mayor, clearly not based on any one we know with the initials RG…..

John Turturro functions as a supposedly seasoned hostage negotiator, only to make a first day rookie mistake, clearly allowing the audience to know just how ruthless the Hijackers really are.

Bearing in mind the talent on display this is not what one might expect from Tony Scott, who adds a few nice directorial flourishes but overall appears to drain away any tension at every opportunity.

Movie stereotypes abound, the brave ex-army vet, the resolute train driver and youngsters in love with the handy webcam, all functioning to push the rather pedestrian script along.

We do get some good shots of NY and the action when it arrives is fun. Who would have thought driving across NY could be quite so dangerous even with a police escort?

Overall, despite better production values, not as good as the 1974 original, which presumably is not what the project was aiming for.

Mildly diverting, rather disappointing and with little palpable tension.

Only the mildest of recommendations, unless you are a massive Travolta or Washington fan.