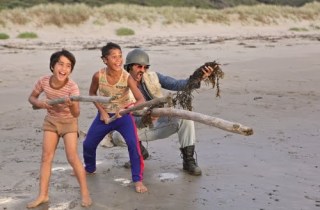 It’s tough being a Michael Jackson fan when you are 11 years old and live in Waihau Bay on the East Coast of New Zealand in 1984. This is especially true when your Nana has gone to a funeral, girls are ignoring you and you are expected to look after your younger brother and two cousins.

Taika Waititi here takes on double duties as the lead actor (Alamein), the often absent deadbeat father of “Boy” and “Rocky” and director of this New Zealand set movie, bridging the gap between the brutally violent “Once were Warriors”and more fantastical “Whale Rider”. The movie was inspired by the Waititi’s own Oscar nominated short “Two Cars One Night”.

Waititi teases out very natural performances from his young Maori actors, especially “Boy” (James Rolleston) and “Rocky” (Te Aho Aho Eketone-Whitu). Their interaction with their friends, Chardonnay, Dynasty, Falcon Crest & Dallas has a ring of truth, despite the naming conventions which apparently was not uncommon. The period detail is good, “Boy” wears a shirt emblazoned with “Asteroids” and “Atari”, a huge engined old saloon car is considered cool and Boy’s auntie refuses to let him have ice blocks for free from the local and only shop.

The family exist happily without their father, their mother having died giving birth to Rocky. Boy imagines his father a great warrior, deep sea diver and MJ performer and whilst he cannot wait for him to return home, he accepts he must be very busy. Actually, he is busy in jail and possesses none of the talents his son attributes to him.

Rocky maintains a healthy fantasy life of his own, believing himself to have super powers, many of which are shown on screen very effectively in animated form. The bus crash and subsequent screams are especially inventive.

Their father returns and true to form, starts messing stuff up. Having formed his own “Crazy Horses” gang, current membership three, Alamein then begins a search for buried money no doubt obtained from one of his many shady activities.

Alamein is portrayed as a man that has never grown up and fails to realise the treasures he possesses without the need to dig them up in the paddock. Whilst he has lost, he has so much left but prefers to hide behind ever more bizarre plans and schemes, that will come to nothing. Waititi plays him well, never allowing the character to show he knows he must change to move on, even though deep down he knows this to be true.

Whilst rightly billed as a comedy, every scene and interaction casts a long shadow of sadness, in unfulfilled potential and the ever present possibility that “Boy” will follow his fathers example. Whether this comes from a lack of opportunity or motivation the result is the same, they accept that their lot in life is actually, not a lot. The time they spend with their father is a joy to both boys but they know he will let them down, he always does.

The main actors interact with other colourful characters against a back drop of barren but beautiful scenery. Not a lot happens but that is the point, not a lot does happen and life continues. Certainly the scene where the children yet again tidy up, following a visit from from dad, might have some viewers pretending they have something in their eye.

The third act does perhaps lose it’s way for a while but the final act has several scenes that pull the audience back in, to an ending that works very well in the circumstances.

Essential viewing for Kiwis and recommended for non New Zealanders, providing both a glimpse of a Maori family in New Zealand circa 1984 and a touching coming of age drama where a young boy realises that fantasy and reality rarely match.