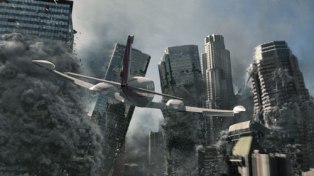 Roland Emmerlich (Director) likes to destroy stuff, pity his poor parents providing him with Lego sets when he was young, toys would not have lasted long.

Fresh from destroying half the world in “The Day After Tomorrow” and “Independence Day”, he is back to destroy the remaining part in spectacular fashion.

Cue many cut scenes to far flung parts of the globe, India, Tibet, all clearly created on the back lot and various doom saying predictions. This is standard disaster movie set up premise with the government doing shadowy things to protect those with money and the need to create a new government when it all goes wrong. Clearly when the world goes to hell what we definitely will need, is aged politicians so they can all start arguing again.

Of course all the set up is just that, foreplay to the main event.

When stuff starts breaking and blowing up, is it spectacular?

Well, yes it is and clearly this is where the money has been spent, leaving little for writers and a story. Streets rip apart, skyscrapers fall and whole continental plates lift up and dump cities into the sea like when you pack Monopoly away.

Whilst spectacular, the effects are just too much. Do we need whole landscapes collapsing just as the plane takes off, runway splitting under the wheels, metro trains flying through the sky, skyscrapers collapsing as the plane flies through? Aircraft carriers lifted on massive tidal waves to crash onto the Whitehouse and the President, who incidentally, was only moments before trying to find some poor girls daddy for her?

This is your basic disaster movie from 30 years ago, complete with corny dialogue but with a new lick of paint and a few nods to contemporary times. We have a Black president (Glover), gruff Russian Oligarch and a modern China that can knock up some “Arks” in double quick time.

The characterisations are non existent and we even get a dog being saved, despite billions of humans perishing.

Any movie that has a scene with Giraffe’s and Rhino’s being carried by Chinese Helicopter gunships to ready built Ark’s, had better be a comedy, otherwise it’s going to be in trouble.

Scenes of office blocks collapsing, workers dangling from windows with ash covered survivors wanderings streets, earthquakes and resulting giant Tsunami’s, can this really be entertainment after so few short years?

Even the reliable John Cusack, effective in very early scenes, begins to sink when overwhelmed by the the onslaught of “green screen” set special effects. Woody Harrelson gets to do his mad “I saw it all coming” eccentric disc jockey scenes but really this is a show reel of effects from the get go. Oliver Platt again a good actor, moves from plausible to shrill shouting at created effects in rapid succession.

When will film makers realise that for at least part of the movie, their best special effect is actors expressions and reactions to each other? Effects are important, especially in event movies such as this but there has to be some cement to hold the wall together, otherwise it just falls over.

The underwater scenes towards the end of the movie seem unfinished and somewhat shoddy, making the Poseidon adventures look good in comparison.

Not recommended unless the following scene sounds like fun. Air Force one, crashing underwater into a massive Ark, itself on course to be destroyed by careering into Mt Everest, unless John Cusack can untangle equipment from door release gears, by hand, underwater, albeit aided by his ten year old son.

Excellent effects cranked up to the max but these alone cannot save a disappointing movie, fortunately a sequel is unlikely as there is, quite literally, nothing left to blow up.