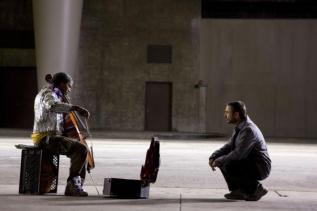 Mental illness can be frustrating, disturbing, even on occasion violent. So for a movie not to take the easy “Awakenings” route and airbrush every scene, any movie dealing with the reality will have to be all of the above.

Following a pedal bike accident, Steve Lopez (Downey-Junior) a column writer with the LA Times, encounters a colourfully dressed down and out, who plays the violin beautifully in Pershing public square in LA.

Following a brief meeting, Lopez decides Nathaniel Ayers (Foxx), previously a student at the elite Juilliard school in New York would make for a good story. Ayers leaving the school after two years, following a serious mental breakdown from which he has never fully recovered. You know the type of article, how did he fall so far, thank god it’s not me type of thing.

This is a project that apparently has been a political football at the studio, once hyped as Oscar bait, now somewhat downgraded, it emerges as a different beast.

Joe Wright (Atonement and Pride and Prejudice) knows how to make good movies, unfortunately in many ways, this is not one of them.

Both Foxx and Downey are excellent, acting not as sterotypical characters but really offering something new. Able support is provided by Tom Hollander (Cello instructor) and Catherine Keener (Ex wife and boss), there is no problem here with the acting.

The symbolism, CGI birds flying through LA as Ayers plays, coloured lights against a black background when he hears an orchestra play, is just clumsy and obvious.

The scenes in the parts of LA most definitely not on the Star maps for tourists, are unrelently bleak. Almost apocalyptic in the depiction of the an area where the “broken” people from society gravitate to. The only ray of pale sunshine, is shown in the form of the LAMP organiser David Carter (Ellis), also well acted, who’s realistic world view on what can be done and indeed what should be done to “help”, is the sole anchor the audience has. Carter says that sometimes just being the friend they need, is all you can offer, this is all about degrees.

The story is really about Lopez gradual acceptance that he cannot really “help” Ayers, perhaps this is the journey the director wishes to take the audience on. As Lopez realises, “you all in or all out”, tinkering is dangerous especially for those you are trying to “help”. Maybe, don’t start what you can’t finish is the underlying message.

If this is the journey we need to take, it is bleak and depressing and does not make for a good or even easy movie to watch. At times downright uncomfortable, almost as if the audience is complicit in Lopez initially simplistic reasoning, “just get him on meds for two weeks”.

This is based on a true story details of which can be found easily online. Ayers suffers Schizophrenia and is one of some 90,000 homeless people within the greater LA area. Ultimately Ayers was helped (moving inside if nothing else) through his unlikely friendship with Lopez. From what the movie shows, Lopez may have been helped more, gaining plaudits for his writing and a better appreciation of a world he, like many of us, did not know existed.

Despite intelligent performances and being commendable for bringing attention to such a serious subject, one wonders who the audience is?

Just like “Beautiful Mind”, would play better as a documentary. Compressing such complex human stories into the rigid formula necessary for “entertainment”, does not work.

Unless an intelligent look at serious mental illness is of interest to you, not recommended.