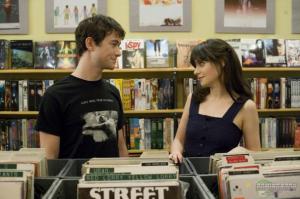 If you look up “Pretty and Slightly Kooky Actress” in the dictionary you will note that Meg Ryan’s name has now been tippexed out and replaced with Zooey Deschanel.

As the beautifully intoned occasional voice over informs us, ‘this is not a love story’ and perhaps a better description might be a love story deconstructed.

Tom Hansen (Gordon-Lovitt) and Summer Finn (Deschanel) are low level office workers meeting by chance at the Greeting Card firm where Hansen has worked for years, with Finn arriving to provide the object of the young male office workers fantasies.

This is a slight tale of a couple falling in and then partially out of love, chronologically mixed up with the days clearly signposted backwards and forwards frequently throughout the movie. We also get some surreal moments, an Austin Powers inspired street dance sequence and most notably, a pencil drawn representation of a scene that is gradually and very effectively, rubbed out. These scenes seem to flow into the story well and definitely add something to the movie.

As with all romantic comedies, music is all important and this does not disappoint. Using a “Smith’s” track to bring the pair together, later music is neatly and seamlessly interwoven into the scenes.

Of course none of this would work if we did not have likable leads in what is essentially a two-hander. In Deschaney and Gordon-Lovitt we have two very talented actors who are believable and we want to spend as much time with them as we can.

Able support is provided by Hansen’s best friends Mckenzie (Arend) and Paul (Gubler) who provide comic relief and an outlet for us to hear more of Hansen’s thoughts. Stealing the show in many scenes is Hansen’s twelve year old sister Rachel (Moretz) who dispenses worldly wisdom and relationship advice like a seasoned pro. This could be treated as a joke but actually works well, especially amusing is when she is called in a emergency after a relationship breakdown, where her brother is systematically smashing dinner plates.

Paul: [Opens the door to Tom’s apartment] We didn’t know who to call.
McKenzie: It’s Amanda Heller all over again.
Rachel Hansen: You did the right thing.

Without wishing to take sides and maybe just a male point of view. Finn, notwithstanding her obvious charms, does appear to do what she likes, when she likes with no thought as to the consequences or messages being sent. That she is upfront in her intentions is not in doubt and no one does love sick puppy as well as Lovitt.
No doubt if you see this with your better half you can discuss this very point, amicably and sensibly like adults.

Certainly Hansen has the most understanding boss in history and no mention is made of how he supports himself after his ‘Jerry Maguire’ moment but this is nit picking reality, when we all know this is movie land.

As Samuel Golwyn Meyer said, “If you want to send a message, call Western Union” but perhaps the intimation from the movie is that compromise is always necessary in a relationship. What you get out is not always the same, maybe both parties here get what they need to move on, professionally or romantically, without this becoming the happy ending we perhaps want or desire
Summary
A very smart, inventive and witty comedy or anti love story if you will, with plenty to say about modern relationships and saying it well.