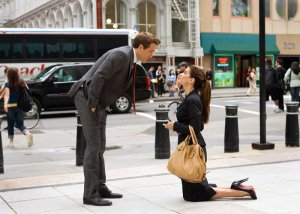 Sandra Bullock has been away from our screens for too long and it is good to have her back. This is the not the role that will refresh her “A list” status but it will do very nicely for now.

Playing the “Ice Bitch from hell” publishing editor, Bullock follows every stereotype that a movie such as this demands.

All staff terrified of her very presence – check

Ryan Reynolds plays her attentive assistant, drinking the same coffee as his boss, just in case he spills hers so he can offer a replacement. Whilst playing to type, Reynolds makes somewhat more of the role than was probably on the page.

There is one fly in the ointment, Tate (Bullock) is a Canadian citizen without a relevant work visa. Hey presto, problem solved as Tate is really in love with her assistant Paxton (Reynolds) who she will marry and then all her problems disappear.

Does Paxton know about this romance and marriage? – No, but these are minor details to be negotiated with offers to publish his manuscript and promote him later.

Impulsively announcing that the lovebirds will return for Gammy’s 90th birthday in Anchorage Alaska, we are then treated to the usual fish out of water scenes.

Of course this is movie world and it turns out that Paxton is not a struggling office minion but really the son of “the Alaskan Kennedy’s” with a sweeping estate overlooking the water. His father (Nelson) owns most of the local town and requires a competent heir, therefore being bitterly disappointed with his son’s literary aspirations. We learn this as he hits bio-degradable golf balls from his extensive porch into the ocean, as you do.

There are some well played early scenes in Anchorage where Reynolds plays on his position of power, not carrying his bosses bulging luggage cases as she is such a feminist. Jumping in and out of bed to provide proof of their love whilst breakfast is bought in and jointly detailing the fictitious marriage proposal. There is some chemistry evident as the two fall out and then inexorably into love. If this is a plot spoiler for you, then you are clearly in the wrong cinema.

Steenburgen is the mother desperate for her son’s happiness and White (of Boston legal fame) plays the game old Grandma who only exists in movies. At one point she is caught with full headdress cavorting in the woods finding her spiritual self, only to be stumbled upon not only by Tate but also her grandson, which is some achievement in a forest the size of Manhattan. This scene and Bullock falling out of a speeding motorboat, together with the final dash to hospital are the clearest indication that this movie was green lit as a concept with the small details, such as plot and character development following later.

We are of course treated to the local eccentrics who are always crazy but lovable, in this case the local general purpose store man who also doubles as a nude pole dancer at the weekend. Oscar Nunez milking his scenes for all they are worth.

We are also treated to the most diligent and well funded immigration clerk in US history (O’Hare), who somehow deems this marriage of crucial importance to National Security by following the “happy couple” to Anchorage to witness their comeuppance at first hand.

A hurried wedding is planned for reasons that are not important and a few plot devices are thrown in forestall the inevitable but there is some enjoyment to be had in the ride.

A few glimpses of the Sandra Bullock that audiences know and love but this high concept comedy is a fair to middling effort. Hopefully this represents a good warm up game for Bullock , with better movies to follow as she finds her screen presence and confidence.

A light frothy comedy that will please some and offend few whilst further solidifying Ryan Reynolds growing leading man status.

Not a bad movie, just not a particularly good one either.