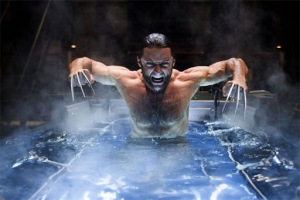 With three X-Men movies in the can, each earning more than the last, many may have thought the franchise was running out of steam – certainly X-Men-3 seemed to have lost direction and focus despite the box office returns.

Choosing the most popular and clearly defined character to focus on their own back story, before neatly linking into the main movies, makes obvious business and artistic sense.

Commencing with a neat montage, that illustrates Wolverine (Jackman) has been fighting all his life in battles from the American civil war, to storming the beach at Normandy and ultimately strafing jungle foliage in Vietnam.

The high water mark of family friendly rated violence is represented by Vietnam, where the bad guys are harder to spot and your half brother uses villagers for R & R whilst appearing to enjoy killing, whether justified or not.

Following the entrance of Stryker (Huston), who asks the mutant pair “You were shot this morning, how did that work out for you?”, the mutants are enlisted into a shadowy group, supposedly doing the governments bidding.

Following an excellent set piece battle at a diamond factory, where Wilson (Reynolds) cuts bullets in half with double Samurai swords and expert marksmen Agent Zero (Henney) fires and reloads twin revolvers in mid-air, Wolverine begins to have serious doubts about his current job description.

Throughly disillusioned following the next mission, Wolverine drops off the radar and retires to the idyllic life, made much easier with the presence of the naturally beautiful Kayley Silverfox (Collins). Resorting to “Logan”, he lives in peace despite the occasional nightmare, in a lodge perched seemingly on the very edge of a cliff. A metaphor perhaps, for how easily this life could be torn from him.

Of course no comic book hero can be left to lead the simple life for long and Logan is forced to return to his alter ego “Wolverine”, subsequently being re-engineered with the familiar metal claws and almost indestructible frame.

Jackman and Schreiber are both excellent – pumped up and ready to fight to the death at every turn. The story twists and turns far more than you would expect in a big budget movie and coupled with excellent effects, makes for a highly enjoyable experience.

There is plenty of humour and the movie and characters seem more than content not to take the whole thing too seriously which makes for a better movie.

New Zealands Queenstown (doubling for Canada) gets to showcase some stunning scenery around the helicopter sequence and the final showdown is also effectively staged and blends seamlessly into the prequels (or sequels?) that the main series now represent.

Including enough adherence to the orginal character to please fans, Brown and yellow jacket in place, without alienating a wider audience, this treads the fine line between both audience expectations confidently without any missteps.

We get to meet other characters that will feature in later movies, Cyclops bringing a new meaning to laser eye surgery and the splendidly obese Fred Dukes, looking not dissimilar to “Fat Bastard” from the Austin Powers movie, is also fun to watch.

There is little to dislike and much to enjoy here and if all “Origins” movies are this much fun, this franchise may just have further to run yet.

Intentionally not as complex or dark as the Batman franchise, X-Men has always been fun and this entry is far better than the sub standard “X-Men Last Stand”.

Hugh Jackman proves he can carry a Blockbuster on his own with this entertaining spin off , which may ultimately prove more profitable both financially and artistically than the main series.

Does exactly what it says on the tin, highly enjoyable and recommended