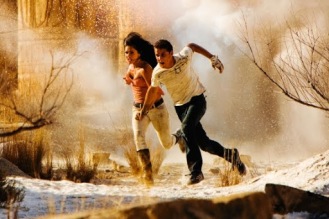 The first Transformers movie was much like its titular characters, transforming a creaky, old concept that no one thought would work into a towering, shiny, sleek and most importantly, profitable franchise.

Whilst the first movie was fun, did not take itself too seriously and gave you some characters to care about – the sequel has none of the above.

Following an opening sequence “set” in Asia, perhaps as a nod to that particular market, the Robots just keep getting bigger and bigger until they resemble large cities careering about the motorway, that they then promptly destroy.

Ok so far, all blockbusters must follow the event movie handbook, start big and blow lots of stuff up.

Sam (La Beouf) is now getting ready to go to college, not just any college but an expensive college “that smells of money or learning”, dependent on which parent you listen to. Sam frets that maybe his long term relationship with Mikaela (Fox) she of the sun kissed exposed midriff, is not going to work. Mikaela is introduced in a provocative pose, astride a motorbike wearing shorts that would make Lara Croft think twice about going out.

I would imagine not many bikes get fixed in that workshop.

Of course Sam’s metal friends will find it hard to protect him at college. A Chevy Camaro is somewhat difficult to hide in a lecture theatre.

College life is portrayed as one long frat party with easy sex and plentiful alcohol. Sam’s roommate bucks the trend by creating his own computer centre, intent on discovering something that matters not to the story, other than to provide another protagonist able to run in slow motion when the explosions start.

Remaining faithful to your distant girlfriend is difficult, especially when attractive women seduce you at every turn, although resisting is easier when they try to kill you during foreplay, with sharp metal attachments. One wonders why, if Transformers can take human form, they hide themselves as articulated trucks, cars and planes but no matter, such details are largely irrelevant.

Meanwhile Optimus Prime (voiced by Peter Cullen) and the team are now part of the military establishment, utilised whenever the country is in dire need. There is a bureaucratic battle over the control of the “squad”and finally the teams control is overseen by a “whitehouse official” with remarkable physical similarities to Donald Rumsfeld (ex US Sec of Defence), this cannot end well or are we reading too much into this?

Megatron (voiced by Hugo Weaving) is promptly rescued from the sea by the Decepticons and clearly a little annoyed, promptly destroys a significant proportion of the American fleet. Sam is targeted as he mistakenly now possesses the symbols required to recover the “Matrix of Leadership”. A sacrifice by one of the main characters allows Sam to escape from “exploding tree” hell.

Following a brief fit in class where symbols randomly assault his senses, we are soon whisked off to a final showdown at the Egyptian pyramids, to destroy Megatron and his army. This of course provides an excellent excuse to destroy another landmark in spectacular fashion, although quite why Sam’s parents suddenly reappear is a mystery. Agent Simmons (John Tuturro), now somewhat discredited by the military, steps in to assist and gets to clamber around the pyramids and at one point gets to stare at Transformer dangly boy bits (yes you read that correctly), John Voight wisely was otherwise engaged when casting called.

There is a lot of running in slow motion from explosions, plentiful robots, rockets and exploding cars etc but it is all but impossible to care about any of the characters. The acting is serviceable but really has no place in a movie that cares little for human characterisation.

Clearly using robots, zombies etc has allowed Hollywood to sidestep censors by allowing violence that would be unacceptable (in mainstream family movies) on humans but appears ok for “nonhumans” to be decapitated and eviscerated in every way imaginable.

Incidentally the robot twins make “Jar Jar Binks” look and sound good, they are such crude stereotypes they give stereotypes a bad name.

Now directors have the power to create anything they want with CGI, where do we go from here?

Perhaps rediscovering the joys of acting, story and plot might be a good start. Awe inspiring effects and stuff blowing up is great (and no blockbuster can exist without) but make audiences care, otherwise what is ultimately the point?

Sometimes more is just that, more.

Similar to “Spinal Tap’s” infamous amplifier, this movie goes up to “11”, if there is no scale how are we to judge how high we should go?

Competently made with the usual Michael Bay flourish but with paper thin characterisations, more CGI than a video gaming “show reel” and seemingly interminable robot fights. This movie frankly insults the audience by battering them with remorseless eye candy.

Ultimately a bit like candyfloss, which looks great but there is really nothing of substance – expect massive Box Office returns