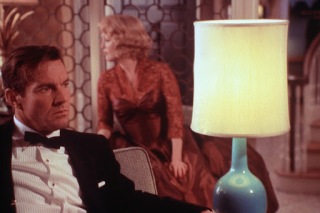 Some of the early scenes beautifully illustrate the structured and well ordered existence led by the characters in this well played morality tale. The children do as they are told and their father works hard and is never at home, meantime mum is the pillar of the local community whilst harbouring a belief that all folk are equal whatever their colour.

There is a real sense that something is not right and change is coming. Two events cause the characters lives to shatter in different directions like a dropped vase.

Julianne Moore has never been better, so pleasant in the first act that she almost sets your teeth on edge. When the realisation of Jakes actions hit home, there is a real sense that her life is over, all of which is reflected in her actions and performance.

Quaid projects the frustrations he feels in a way that is believable, fighting inner demons driving him outside the cosy world of sweaters, golf on Sunday and presents round the fire at Christmas. There are no grand-standing speeches, just two adults attempting to adjust to their changed circumstances as best they can.

Moore seeks solace and companionship with her “negro” gardener Donald (Dennis Haybert) who plays the role with his usual sensitivity and honesty. It is difficult to imagine whether this relationship is more or less shocking (in this era) than Jakes “problems”. The hypocrisy of Jakes words when the relationship becomes public only serves to underscore how ridiculous widespread racism truly is.

The film is shot in a very fifties style, even the credits read like early TV show. The period costume, furniture, cars and even attitudes appear spot on. Interesting to watch a period piece such as this and believe anyone’s real desire to return to the good old days. Maybe life is messier and more complicated now but at least there is more out there for people to see & deal with, however badly.

All three main character performances are good but Julianne Moore really appears to inhabit this role, especially in the earlier scenes. She seems almost instinctively to know that this will not last, even though she has no idea of what lies ahead. Whilst the drama is played out within one or two families, it is the town and America itself that will never quite be the same again.

An outstanding, thoughtful & well paced drama from director Todd Haynes with a standout performance from Julianne Moore. The story neatly summarises the hypocrisy and deep rooted tensions that lay barely below the surface of 1950’s small town America. A “small” story about a family imploding which also happens to reflect the growing pains of the era itself.