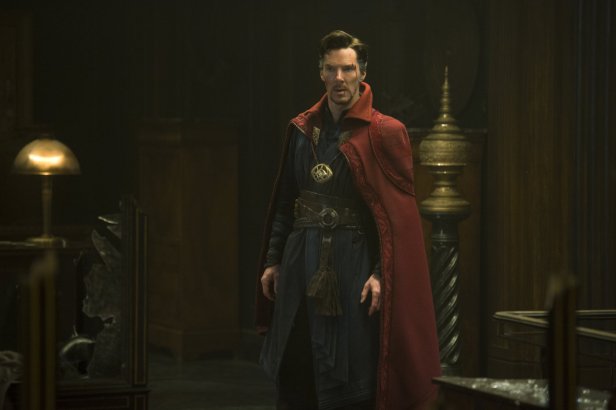 Just like car companies, Marvel are determined to fill every niche market possible. Clearly there was an opening for a movie about a brilliant neurosurgeon who, following an incident, goes to Nepal to recover. There he studies with the “Most Ancient One” Tilda Swinton and “Mordo” Chiwetel Ejiofor, before eventually becoming “Dr Strange” Benedict Cumberbatch, complete with a mystical red cloak.

By the way, this is all completed within a psychedelic haze, mixing the feel of a old school-martial arts and a Beatles concept album albeit with state of the art CGI.

If this all sounds a bit odd and well outside the normal National Health system offerings, well it is but somehow this works. Mainly through a believable central character, aided by strong support cast and some truly mind bending effects.

Marvel have produced another character to add to their ever growing stable, soon we will not be able to move without tripping over superheroes. The usual post credits cameo indicating Dr Strange will be on the Avengers call out pager list.

Of course all origin stories need a evil doer to battle with, here provided by “Kaecilius” Mads Mikkelsen, who is clearly used to getting his way. As usual despite all their superpowers, much hand to hand fighting will eventually become necessary.

Unusually Strange does keep popping back into the real world to see his “is she/isn’t she” girlfriend Rachel McAdams  to get patched up as and when the fighting gets out of hand.

The story races along and manages to present the character fully formed by end of play, ready for the sequel or as part of the Avengers ensemble as required. Marvel are now old hands at this game by now.

There is no question that on present form Marvel integrate humour into their films far better than the sombre DC titles. As soon as the level of pomposity reaches bursting point, a suitable bon mot or pratfall brings the character back to some semblance of reality. Watch out for the best line of the movie, albeit teased in the trailer.

Not that reality gets much of a look in here, the story basically revolves around the usual, protect the earth from destruction by other world beings. The group are tasked with protecting certain geographical points handily within three movie going demographic cities, Hong Kong, London and New York.

Cumberbatch and Mikkelsen look like they are having fun, Swinton deploys her usual other worldly persona, Ejiofer & Benedict Wong tag along for the ride. McAdams does her best with limited screen time in a thankless role.

Is there more juice in the tank to take the story further, no doubt and arguably this is one of the more interesting Marvel characters. Dr Strange being somewhat more cerebral than a man with a hammer, however cool he may be.

Surprisingly fun, albeit with well out there visuals which may put off some but still manages to successfully introduce a lesser known Marvel superhero character.

The Doctor will see you now, he may seem a little odd….